“Sometimes beauty emerges from the most difficult experiences,” says Simon, as he stares towards the horizon that hides behind the majestic Golden Gate Bridge. Now in his late-thirties, Simon is about to embark on a journey that seemed unreachable just a year ago. In April Simon will start his job as a software engineer with one of the leading tech hubs in the world. However, unlike the ordinary software engineer, Simon acquired his computer coding education inside a prison classroom, behind bars.

Simon has been given the opportunity to rebuild his life and gain access to sustainable employment. 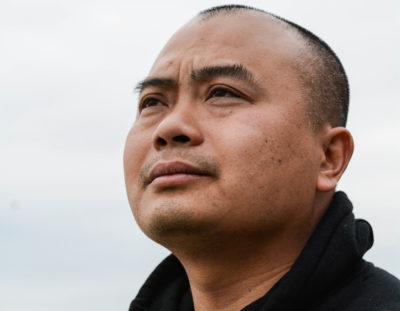 In 2017, after spending 21 years in prison, Simon became a free man. While most of us perceive prison to be a place in which freedom ceases to exist, Simon disagrees: “You can obtain freedom wherever you are. I could be walking in a park, but at the same time be thinking about things that confine me; and therefore, I’m not free. Other times, I could be sitting in a prison cell thinking about ideas that are liberating, and during those moments, I’m free.” Reflecting on the power of the mind and perception, Simon takes us on a journey of redemption and resilience.

Simon migrated to the United States from China with his family when he was 15-years-old. Along with family difficulties, he also had to deal with the language barrier and found himself seeking refuge in a group of individuals that provided him with a sense of belonging. However, belonging to this community came with a price, and soon enough Simon began taking part in a lifestyle that did not reflect his full potential.

In the Spring of 1997, less than a year after arriving in the United States, Simon and his friends were arrested for committing a robbery that was planned out by older gang members with whom he and his friends had just recently started associating. While the robbery was loosely planned out, Simon had one role to play: tie the victims up with duct tape and point an unloaded gun towards them. During the 30 minute, in-house robbery, Simon did not move from his position on the first floor of the two-story house. He did as he was told and did not hurt any of the victims. One of his co-defendants, however, who was supposed to be searching for valuable goods on the second floor, committed an act that was not part of the plan: sexual assault of a young, pregnant woman. More than 24 hours after the robbery, Simon was deeply shocked to learn that his co-defendant had committed such a horrible act. Simon and his friends were arrested a few days later; and that was the beginning of Simon’s long journey with the criminal justice system.

Simon found himself inside a juvenile detention center with a 26-year sentence. On his 18th birthday, he was transferred to Pelican Bay State Prison, an adult supermax prison. Throughout the next 19 years, he spent time in four different facilities, until he reached San Quentin State Prison in 2013. 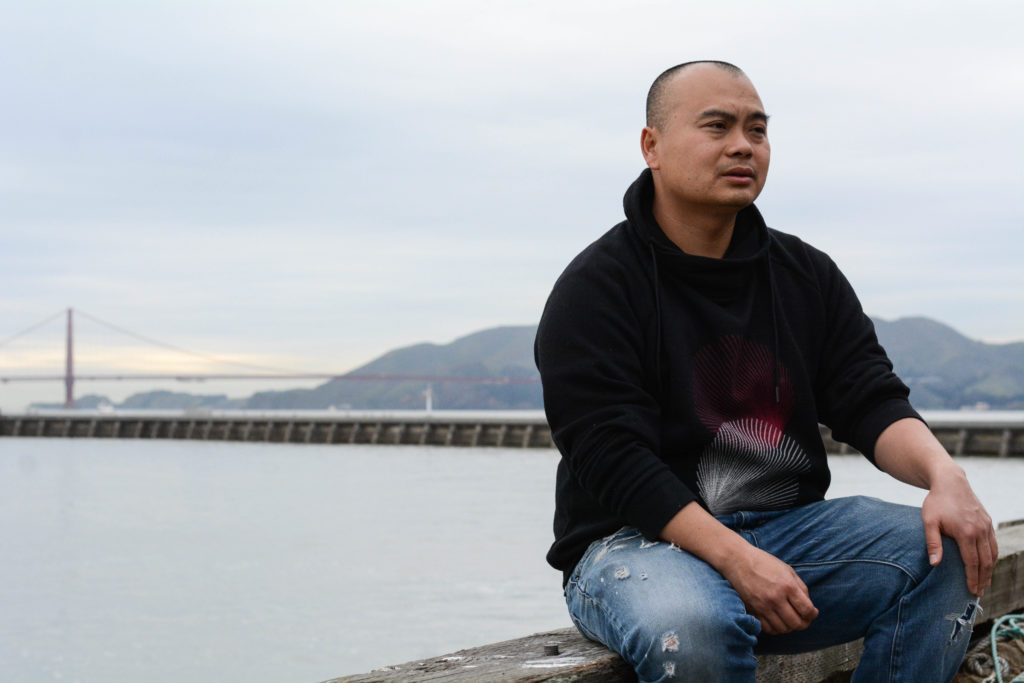 Having spent majority of his life incarcerated, Simon reflects on his idea of “time” and says, “I believe ‘time’ is a concept, and it’s entirely subjective. I’ve spent time in isolation, and quite often lost track of time while I was in the hole; completely isolated from the world and deprived of all human interaction. I’ve learned that we create ‘time’ as a structure, in order to suit our own needs and society’s needs. But the funny thing is, ‘freedom’ and ‘time’ are both subjective. We have both, the freedom to be confined and the confinement to desire freedom.”

While Simon’s educational journey began with reading philosophy and victim awareness books, the most life-changing of all was when he entered into The Last Mile (“TLM”) program. Simon recalls that when he first heard about TLM on the San Quentin yard, he had his doubts. He didn’t believe that the system would give those that are incarcerated an opportunity to learn on a computer, and even more so, learn how to code. However, as he saw others go through the program and flourish in their learning and understanding of computer science, he decided to give it a chance.

Today, five years later, Simon has found his passion, vocation, mission, and profession. Like most TLM participants, Simon had to go through years of deep reflection and introspection in order to display the character traits that TLM seeks in potential participants: “I learned how valuable self-reflection is. Often the simple evolution of growing up, maturing, and having the opportunity to endure pain and suffering can teach you a lot about life. Without pain and suffering you may not be able to see the beauty in life. Many people ask what the meaning of life is, but sometimes there isn’t an answer for every question that we ask. Maybe the meaning of life is to just live it. So the most valuable part of life can be in asking the question; and with a sense of curiosity, you can enjoy the journey as it comes, whether bitter or sweet.”

Although Simon takes full responsibility for the crime he committed when he was a teenager, he is still processing the years of imprisonment he underwent because of his co-defendant’s brutal crime. If it weren’t for the sexual assault group charge, Simon would have spent only two years in a youth correctional facility for an armed robbery. Simon is physically free now, but has to live within strict limitations as he doesn’t own a passport and is a registered sex offender. Despite the fact that Simon did not engage in any sexual act the night of the robbery and was completely unaware of what his co-defendant was committing at the time, he still has to take full responsibility for another person’s actions. [1] 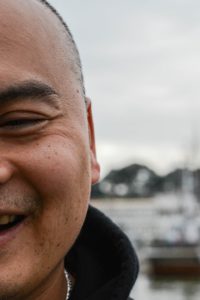 Still Simon manages to uphold a positive perspective: “First, we have to explore the question of who we are; what makes us who we are? It’s our life experiences. If you are resentful and bitter about things, then you did not learn anything from your experiences. Your experience is what makes you who you are. I’m happy with the man I am today; I am kind, generous and compassionate. However, without my past experience I wouldn’t be who I am today. So it’s a sense of acceptance that really matters. Therefore, no matter how difficult life is, no matter the amount of challenges that come your way, there’s always a learning in that experience. It’s an opportunity for growth and self-development. If you were to ask me if I would change anything about my past, I would say other than the people I hurt as a byproduct of my crime when I was teenager, I wouldn’t change a thing. My life experience makes me who I am, and I’ve accepted it.”

Even with the legal restrictions Simon is confronted with daily, he is grateful that through his training with TLM, he has been given the opportunity to rebuild his life and gain access to sustainable employment. Before receiving his job offer, Simon spent three months at Hack Reactor, an intensive coding bootcamp, to further enhance his coding skills.

With countless all-nighters and tremendous hard work, Simon managed to graduate top of his cohort. There is beautiful irony in Simon’s perspective when he talks about his achievement: “Right after I found out I got my first job offer, I thanked Beverly [Parenti, TLM’s co-founder] for the opportunity provided by TLM. However, she indicated that it was my own hard work that made all this possible. While that is true, I told her that opportunity has to come first in order for hard work to be applied. TLM is at the forefront of providing opportunity, and it’s a stepping stone to hard work. Hopefully society can follow the footsteps of TLM and build a better, more harmonious world.”

As he hones in on the importance of TLM’s mission, Simon expands on his idea of opportunity in relation to justice: “Often times society associates justice with judgement, but I try not to judge. I try to understand and empathize. So justice, to me, means equality. Regardless of background, each individual deserves the opportunity to live to their full potential. Not all of us are born equal, not all of us are born into an affluent family or neighborhood, or what society deems as the ideal skin color. So given that fact, justice means to be fair. So let’s be fair!”

With incredibly profound insights on the human condition, Simon has also managed to incorporate the rigorous computer coding mindset towards understanding the nature of society. “Software engineering is really straightforward; you design a system the best way you know how. Occasionally, the system may not function and run as efficiently as it should because of a bug. But when there is a bug, you go to the source of the problem and debug it. You try to optimize the system and make it as efficient as possible. Software engineers never deploy a broken system and assume it is fixed. However, when it comes to society we obviously don’t work as logically as a computer; we’re driven by emotions so it seems as though we have trouble going to the source of the problem. Therefore, we tend to bury the problem, or completely hide the bug. There’s so much inequality in this world, but we just seem to suppress it.”

Simon’s story is just one example of the compassion, brilliance, and determination that hides behind prison walls. As TLM expands, we hope to pave the path to success for others like Simon. While TLM is doing its best to systematically change the way in which the criminal justice system operates, it is crucial that a change in narrative has to occur as well. Fundamental change happens when each individual finds the ability to shift their mindset, broaden their perspective, and let go of stringent beliefs. Similarly to how Simon managed to view his incarceration under a positive light, ordinary citizens must find it in themselves to provide a second chance to individuals like Simon. Most often it’s actually not even a second chance, but a first chance.

As Simon and I end our interview, and he gets ready to head to his volunteer job at Asian Health Services, he says to me, “TLM is giving people like me, people who have come from a terrible background, the chance to build a new life. We are given the opportunity to make better choices. What I hope for the world is that it follows TLM’s path to be more tolerant and creative towards solving social problems. We have to follow our hearts; if it’s the right thing to do, then do it! Let go of all judgment and do your best empathize.”

[1] Currently, the law upholds that if a sexual assault (or any kind of violent crime) is committed, regardless of whether you personally acted upon the crime or not, if you were in the premise, you are charged with committing the crime.

Simon has proven to be a valuable community member and deserves to be free from political persecution.  He is an active member at Asian Prisoner Support Committee, where he volunteers his time supporting community events. In addition, he underwent an intensive computer coding program and is now a full-time software engineer at a tech-startup. He also uses his networks to support other formerly incarcerated individuals looking for jobs in tech, as well as frequently volunteering to pass out food to homeless communities in San Francisco and Oakland.

After 22 years of incarceration and detention, Simon is finally reunited with his family and has built a loving community around him.  Unfortunately, the deportation order and the label as a lifetime sex offender prevents Simon from truly being free and active in his community.

Watch a video about Simon and his campaign here!