The Last Mile: If you do get paroled, what will you do first? What are your entrepreneurial plans? - Kenyatta Leal

When I parole, the first thing I want to do is see my family. My Mother Adrienne, my Aunts Evy and BJ, my brothers Tony and Tiko, all of my cousins, nieces and nephews, everyone!!! I want my family to know that I’m home and I’m home to stay. I’m really looking forward to sitting down at my Aunt Evy’s kitchen table and eating a home cooked meal!!! She and I have been planning my homecoming meal for the last 19 years so I can’t wait to bring it to fruition. I can taste the ribs already!!!

After spending nearly 19 years inside prison, the single factor that's made the difference in my transition has been the support I've received. 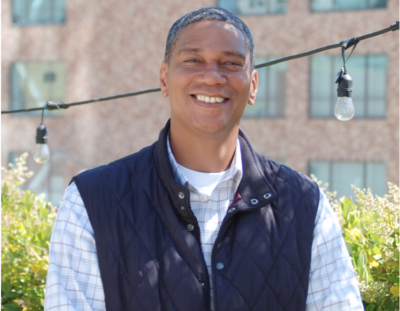 As far as my entrepreneurial aspirations go, I have a great deal to learn so I plan on walking into every situation with the mindset of a student and soaking up as much knowledge as I can from everyone I come in contact with. I plan on using what I learn to get a beta version of “Coach Potato” up and running for the 2013-14 football season. At the same time, I plan on attaining sponsors that will create opportunities to engage football fans EVERYWHERE with the Coach Potato brand. I I plan to officially launch Coach Potato 1.0 week one of the 2014-15 football seasons. My goal is to make Coach Potato synonymous with televised football games.

In addition to my plans for Coach Potato, I will not rest until The Last Mile is recognized as the undisputed leader of prisoner reentry programs on the planet.

After spending nearly 19 years inside prison, the single factor that’s made the difference in my transition has been the support I’ve received. While I was incarcerated I spent a great deal of time and energy identifying and addressing areas of my life where I knew I needed help. Having programs available to me to actively address those issues was critical for me. In programs like VOEG, No More Tears, C.R.I, and TRUST  I was able to talk to other people about what I was going through and more importantly how to deal with it. Through those programs I learned that there were other people who faced similar challenges and despite all of the uncertainty I was not alone. In prison programming helped me develop a support network of people and agencies that are currently assisting me in my transition. For example, my participation in The Last Mile while at San Quentin helped me land a job at RocketSpace once I paroled. I am just one of many currently transitioning from prison to the free world but for what it’s worth I would strongly urge anyone who’s truly concerned about improving the transition process to get involved in reentry programs both inside and outside prison. These programs really do make a difference.