Learning to Code in Prison

Freethink in partnership with Stand Together

55% of formerly incarcerated people end up back behind bars. Learning to code can change everything for life after prison.

A study from the U.S. Department of Justice followed the formerly incarcerated, released across 30 states. The report showed that recidivism rates increased each year following release. At three, six, and nine years after release, recidivism rates were respectively 68, 79, and 83 %.

According to the same report, those released in 2005 have subsequently been arrested two-million more times. It’s because of alarming statistics like these that an organization called The Last Mile steps in to offer incarcerated individuals a better way to transition into life after prison.

The Last Mile has a 0% recidivism rate among participants in the program.

Freethink in partnership with Stand Together 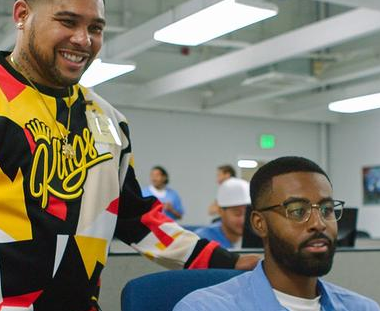 A study from the U.S. Department of Justice followed the formerly incarcerated, released across 30 states. The report showed that recidivism rates increased each year following release. At three, six, and nine years after release, recidivism rates were respectively 68, 79, and 83 %.

According to the same report, those released in 2005 have subsequently been arrested two-million more times. It’s because of alarming statistics like these that an organization called The Last Mile steps in to offer incarcerated individuals a better way to transition into life after prison.

A Broken System
Shocking recidivism rates in the U.S. represent a fundamental failure in prison and jail systems, with respect to their supposed goals of deterring future crimes and rehabilitating former criminals. What is recidivism? The term refers to the likelihood that a convicted criminal will reoffend after being released from prison or jail.

When a person’s time in prison is spent idly, without purpose, and without learning a skill to help them survive by legal means outside of the system, the individual exits prison with the same knowledge and social connections when they were initially incarcerated. The only difference is that they now have to list their convictions on job applications.

Incarcerated individuals in the U.S. make up 25% of the world’s population living behind bars.

This failure of our justice system not only represents an enormous injustice to the prison population, but also a waste of human resources and a detriment to quality of life. For example, the state of California spends more on prisons than higher education.

Learning to Code for Life After Prison
With help from Stand Together, The Last Mile is on a mission to break the cycle of America’s incarceration problem – using coding. Several years ago, founders Chris Redlitz and Beverly Parenti who work with aspiring entrepreneurs in Silicon Valley, were asked to visit San Quentin to speak to a group of men about business.

What they were surprised to encounter were men with a hunger to learn and a thirst to change their lives. It was not the group of stereotypical social misfits they expected to encounter. The men’s intelligence and commitment to create a productive life after prison surprised Redlitz and Parenti.

It was clear, however, that the men lacked the fundamental business skills that would be critical to gain the success they were seeking. So The Last Mile began bringing education about coding and technology inside prison walls. The organization provides rehabilitation and crime deterrence by helping incarcerated individuals change for the better.

The Last Mile’s efforts begin the moment someone enters prison. They provide opportunities for incarcerated individuals to spend their prison sentences acquiring marketable skills like coding that will ultimately help them land a job after, or even before, they’re released.

The prison education program is the first of its kind in the U.S., and it’s been successfully implemented into men’s, women’s, and youth facilities. The Last Mile is tackling the country’s incarceration problems head-on, and their efforts are working.

The organization currently has 19 prison classrooms, 577 students, 70 successfully returned citizens positioned in higher education or employed, and a 0% recidivism rate for program participants.

Jason Jones’ Inspiring Story
One participant in The Last Mile, Jason Jones, spent 13-and-a-half years in prison. He entered the foster care system at eight and joined a gang at 11. He committed a violent crime at a young age and spent the majority of his adult life in prison, where he earned plenty of write-ups for infractions like having a cell phone, fighting, and participating in riots.

When Jason was introduced to The Last Mile, he didn’t know what coding was. When he was incarcerated, flip phones didn’t exist and he’d never even touched a computer. Like most men in the program, Jason had never even been exposed to technology.

Jason was in the very first class, which started with a coding bootcamp. He was required to team up with a partner and build a website in a week.

The assignment precisely targeted The Last Mile’s primary goals – teaching 80% technical skills and 20% soft skills. Jason and his partner had to work together, like they would have to with coworkers when they reentered society.

The Last Mile has a 0% recidivism rate among participants in the program.

While in the program, Jason began to realize his own potential and self-worth. He learned discipline, self-love, and began to see a clear direction forward for his life after prison. Jason excelled in the program, so much that he secured a job offer before even being released.

Jason now acts as a mentor and instructor for The Last Mile. He shares about his past experiences with those who are incarcerated, which gives them hope, inspiration, and meaning. When others see that he was able to make a remarkable transformation, they understand that they can, too.

When viewed at a global scale, U.S. incarceration statistics are staggering. Mass incarceration in the U.S. accounts for 25% of the world’s population living behind bars, yet the country only makes up 5% of the global population.

But stories like Jason’s present a ray of hope that the U.S. incarceration rate can decrease with forward-thinking solutions like the ongoing efforts of The Last Mile.