How has TLM positively impacted your life? - Carrie Murchison

Carrie is a returned citizen of the Last Mile program from Folsom Women’s Prison. Released in August 2019, she is now helping other participants as an Academic Support Representative. Carrie is focused on furthering her education and building upon her abilities as a full stack developer. She is currently proficient in HTML, CSS, Javascript, NodeJS, SQL, and mySql.

How did participating in The Last Mile set you apart within the prison system?

There is something called the illusory truth effect (also known as the validity effect, truth effect, or the reiteration effect), it is the tendency to believe false information to be correct after repeated exposure. I feel like it applies to the treatment of inmates in that when we are treated like we are less than, we begin to believe it and behave accordingly. The only exception to the way I was treated throughout my incarceration was during my enrollment in this program. It was a mind blowingly novel concept to finally be challenged mentally, and then to be to be afforded the space to independently analyze and develop solutions until mastering each concept in the curriculum. The Last Mile program offered a chance to rise to the occasion, rather than lowering myself to my surroundings and circumstances.

As I worked my way through the curriculum devouring every page and every lesson, it was quenching a thirst I wasn’t even aware that I had. 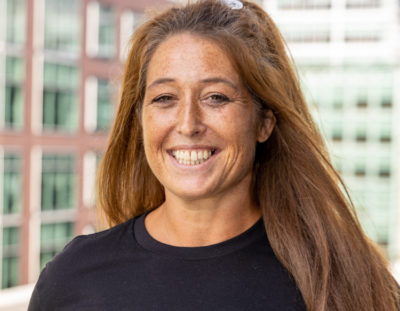 What lessons & tools did you gain in The Last Mile Classroom?

As I worked my way through the curriculum devouring every page and every lesson, it was quenching a thirst I wasn’t even aware that I had. Besides the knowledge and programming skills that I gained in the program, I was able to heal many of the numerous injuries my spirit had sustained by the very broken system of corrections and its officers. My dignity was restored as a side effect of The Last Mile program holding me to a high standard and having an expectation of capability and success. I slowly realized that I still had potential, and I resolved to seize this opportunity with every fiber of my being. I learned that I am tenacious and am capable of achieving a goal with hard work and determination. I know that I would be ill prepared for life outside without the growth that I had physically, mentally and spiritually as a result of this program and for that I am eternally grateful.

How has TLM positively impacted your life after incarceration?

My skills as a programmer are an insurance policy. With these skills I never have to be in the vulnerable position that I was in prior to my incarceration. The value that brings in my life is immeasurable. Just as my crime and punishment affected my children’s lives as much, if not more than it did mine, the impact this program has made and continues to make directly affects my children as much if not more than me. The other day I heard my daughter on the phone telling her friend that her mom is a computer programmer and this feeling gratitude for everything The Last Mile has done for me just washed over me. I can’t really put it into words but I hope to show in my actions the devotion I have to this program, it’s participants, and to the people who made sure that it was available to me when I got to FWF.