Chris, we have a chance to get Harry out of prison, can you provide a support letter today? 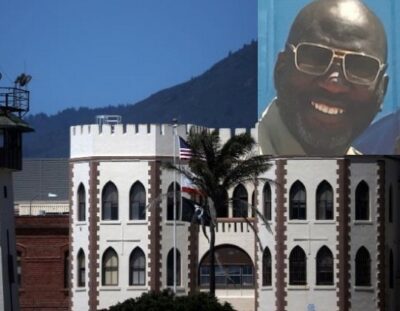 On November 7, 2020 I received a welcome call from my good friend and The Last Mile (TLM) board member MC Hammer. He asked, “Chris, we have a chance to get Harry out of prison, can you provide a support letter today?”

I previously wrote two letters of support for Harry, so I was able to fulfill Hammer’s request promptly. He submitted it to his contacts in Washington, DC. As days passed and tensions in DC intensified, the possibility of a pardon or commutation seemed more unlikely. I feared this was another lost opportunity to help restore the dignity of a man who had served his time and was committed to improving the lives of those who are struggling in incarcerated communities, where hope often seems futile.

Then, on Sunday, January 17, 2021, my wife and TLM co-founder Beverly Parenti received a voicemail from the White House informing us that the letter of support I wrote at Hammer’s request was being reviewed in the Oval Office as a result of its reference to The Last Mile.

With the exiting President’s term ending in a matter of days, we anxiously waited for confirmation that, after serving over 30 years in state and federal prison, Michael “Harry O” Harris would be coming home. The wait continued into the early hours of the administration’s last day, until it was finally communicated that yes, Michael Harris’s sentence was commuted. He would be released from Lompoc Federal Prison, effective immediately.

The news was joyous for us, but I can only imagine how impactful it was for Michael and his family. Michael Harris, the infamous Harry O, is a free man. His story will make Hollywood pay attention and his community take notice.
How did the case of a drug kingpin and mythical music industry icon land on the desk of an outgoing president, whose other pardons and commutations seemed to be quid pro quo for future favors?

This is a story that I never imagined telling, let alone actively participating in. Our involvement in Michael Harris’s story began in 2010, the first day I walked onto the grounds of the legendary San Quentin State Prison. Entering San Quentin for the first time is a daunting reality of gates, armed guards, and an ever-present gloom. While escorted through the prison yard enroute to speak to a group of men about business and entrepreneurship, I was greeted by Michael Harris, San Quentin’s “OG.”

At 6’5” 300 lbs, Michael is a mountain of a man with a gentle demeanor and caring soul focused on creating a better life for the incarcerated community. During my speaking session that first day in a small classroom overflowing with justice-involved men, Michael thoughtfully challenged my presentation and peppered me with questions about business and venture capital.
I guess I held my own, because we immediately bonded. He encouraged me to step out of my comfort zone and do something that could have a lasting impact on a population that needed and deserved help, support, and direction. The result of our collaborative thinking was the creation of a program that taught aspiring entrepreneurs how to start a business after they served their time, resulting in The Last Mile.

Entering the prison system and earning trust from the community inside is not an easy task, but Michael believed in our collective vision and put his trust in Beverly and me. With his influence, he helped us establish a fledgling prison education program during a time of economic uncertainty and spiking incarceration rates. That fledgling program has grown to include a computer coding curriculum and has become the most requested prison education program in the US.
It was clear that his influence and commitment to change the prison life experience and create opportunities for incarcerated populations far outweighed his self interest. Not only did he help TLM, he was part of the team that relaunched the San Quentin News and financed the paper’s printing when it was on the verge of shuttering.

After serving 26 years, on October 11, 2011 Michael was released from San Quentin State Prison, eager to restart his life and become a voice of influence for social justice. Unfortunately, he was greeted at the gates by the U.S. Marshals who took him into custody to serve a controversial consecutive federal sentence.

Initially, Michael and I communicated regularly during his term in federal prison in Lompoc, CA; we exchanged (federally monitored) emails and spoke on the phone about his business ideas and commitment to helping the justice-involved community. For a while, Michael was cautiously optimistic that his case would be overturned, but as the days, months, and years dragged on, our communication grew sparse as hope became increasingly difficult to maintain. The fateful phone call we received from the White House on January 17th changed the trajectory of Michael’s life.

The support letter I wrote at MC Hammer’s request made it to the president’s desk. But the White House receives thousands of requests for clemency, why Michael Harris?

Most of the administration’s final clemency discussions were led by Ivanka Trump and Jared Kushner. When viewing the file for Michael Harris, Ivanka immediately recognized “Chris Redlitz” and “The Last Mile,” an exciting, yet humbling occurrence. Clearly her exposure to The Last Mile the previous year left a lasting impression.

After the board members toured IWP, they settled into The Last Mile coding classrooms where students presented the capstone project websites they created for businesses they hoped to launch when they returned home. It was an unforgettable experience for the students, and one that left a notable impression on Ivanka and the other attendees.

In the final hours of the outgoing administration, 143 well known and/or controversial people from politics, business, entertainment, and others with long criminal records received pardons or had their sentences commuted, including Michael Harris. This outgoing administration had for years spawned divisiveness within our populace and destruction within our political process, yet Michael Harris’s commutation provided a tiny silver lining that shed a flickering light on their positive criminal justice reform efforts, which also included the passage of the First Step Act in 2018.

Coming full circle, the man who helped launch The Last Mile (with nearly 1000 participants to date) provides a clear lesson in true reciprocity. Today, finally, he is a free man, thanks to the organization he helped to launch over 10 years ago.
TLM graduates, their families, communities, and all who have benefited from our success, feel gratitude toward Michael Harris. Now that he has walked The Last Mile from Lompoc Federal Prison into a new life, he is another extraordinary example that embodies the TLM slogan: “Paving The Road to Success.”