Through Justin I met Scott Budnick. Through Scott Budnick, I met Chris Redlitz. And through Chris Redlitz, I met Tulio Cardozo. Tulio was one of the first graduates from The Last Mile. As I had done, Tulio made some bad decisions as a young man, becoming involved with drugs. While incarcerated, however, Tulio chose to reinvent himself. Through textbooks, he trained himself how to code computers. Those efforts brought Tulio to the attention of Chris Redlitz and Chris authorized Tulio to participate in The Last Mile training program. When Tulio concluded his prison sentence at San Quentin, Chris offered Tulio an internship so he could learn more about working with technology companies.

As it turns out, Tulio also followed the pattern of masterminds. He lived deliberately, and his deliberate actions led to success. 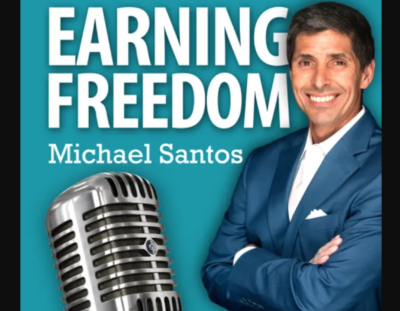 As it turns out, Tulio also followed the pattern of masterminds. He lived deliberately, and his deliberate actions led to success.

Although I didn’t know much about technology, Tulio had a wealth of information. He invested hundreds of hours helping me to build MichaelSantos.com. Whenever I had a technology problem, I could turn to Tulio for immediate advice. If he didn’t know how to solve the problem, he used his resources to help me find solutions. The human connections, I learned, were incredibly valuable to accelerate growth.

What type of human connections are you making?What could you do today to build stronger, more valuable connections tomorrow?In what ways will the connections you build contribute to your success?

Besides introducing me to Tulio, Chris Redlitz also introduced me to the importance of social media. Chris and Beverly used Quora as a resource for teaching prisoners at San Quentin through The Last Mile program. Historically, prisons isolated people inside from the broader population. Yet Chris recognized that if people were going to overcome the challenges they would face upon release, they would need to build stronger connections. Although prisoners didn’t have direct access to the Internet, through volunteers, they could use Quora to interact indirectly.

Quora was a question-based website. Anyone with access to the Internet could use the Quora website to ask questions. Then, the millions of people who used Quora could answer. Those who responded with subject-matter expertise would receive more attention. When people asked questions about prison on the website, The Last Mile team would print out those questions and bring them into San Quentin. Men who participated in The Last Mile program had subject-matter expertise on such topics, and they handwrote responses to questions that people asked. Then team members from The Last Mile would convert the prisoner responses into a digital file and publish responses on the Quora website.

“You should open a profile on Quora,” Chris advised me during our first meeting. “Start answering questions about prison.”

When I returned to my computer, I logged onto the Quora website and began to explore. In the search field I typed prisons and I saw all types of questions. I started to answer, always being authentic about the perspective from which I was writing. Responses I wrote have generated more than 1.1 million views, broadening my social network.

As a consequence of that exposure to my writing, many opportunities opened that would advance the career I was trying to build. Several editors of other publications contacted me and asked permission to publish more of my writing. Gizmodo, a popular technology website published one of my articles, generating thousands of new connections. An editor from The Daily Dot, another online news service invited me to contribute articles. I received invitations to contribute new articles for many publications. That publicity brought me to the attention of Dr. Alan Ross, a professor at the University of California in Berkeley.

“I’ve got more than 700 students who want you to come speak about your experiences in prison,” he said.

I’m hoping that readers who are in jails or prisons will see the pattern. Many opportunities opened for me when I transitioned from the prison in Atwater to the halfway house in San Francisco. But had I not prepared myself during the decades I served as a prisoner, none of those opportunities would’ve opened. When I went to prison I didn’t have any academic credentials and I didn’t know how to write a coherent sentence. I certainly couldn’t stand in front large audiences and give one-hour lectures, or write for publication. Yet as a consequence of my exposure to Socrates, I learned about Socratic questioning.

Instead of focusing on my own struggles, I focused on what my avatars would expect. By anticipating their expectations, I had reason to avoid the negativity and criminal influences. Instead, I focused on educating myself, on contributing to society, and on building strong support networks. Those decisions led to new relationships and new opportunities. They empowered me through the time I served in prison and they eased my adjustment into society upon my release.

As a consequence of my experience with Quora, my social media profile grew. By posting regularly on Facebook, thousands of people ‘liked’ my public page. On Twitter, my followers grew into the thousands. On LinkedIn, I could build an online resume where anyone could read about my passion for improving outcomes of our nation’s prison system. More than 1,000 people followed my progress through LinkedIn.

By building a larger social network I could claim more authenticity. Instead of hiding from my criminal background, I lived transparently. Every step I took had a relationship to the successful life that I wanted to build. Since I anticipated that others would judge me for the bad decisions I made when I was 20, or the decades I served in prison, I wanted to provide them with more information to influence their judgment. By populating the record with my writing and speeches, I could influence them. And by influencing them, I could open more opportunities. Some of those opportunities brought financial resources, many did not. Either way, every investment of time that I made to spread awareness about the criminal justice system paid enormous dividends. They brought experience that I needed, they brought new relationships, and they brought new opportunities for me to persuade other people that I was worthy of their time.

The stronger my social network became, the more opportunities opened. During the time that I served in the halfway house, NBC Bay Area Proud profiled my work, PBS NewsHour featured me on a segment, and organizers of a TEDx conference in Silicon Valley invited me to present. With that exposure, I built more credibility. I could then leverage the credibility to further my quest to improve outcomes of our nation’s criminal justice system, while simultaneously working to build a career.